Looking back at an incredible day at Memorial Gym 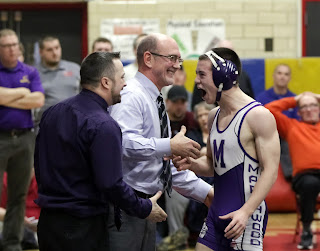 Sanford’s historic Memorial Gym held the Maine Class A Wrestling Championships last weekend and fans were treated to everything from overtime matches to upsets to a couple first-period pins.

The Marshwood Hawks won their sixth team title in the last seven seasons as they placed all seven of their wrestlers — including a pair of champions in Liam Coomey and David Spinney.

I had a chance to talk with 13 of the 14 state champs and the winning coach on Saturday evening. Here is a complete recap of the finals with their reactions.

“It feels amazing. I’ve been working my whole life for this because I’ve been wrestling since kindergarten,” said Craig, who kept the 106-pound title in his family after his brother Cody won four straight from 2014 to 2017.

Craig had an early lead but would be put to his back by Frost and had to fight off what would have been a shocking pin. The Skowhegan freshman regained control after Frost’s flurry and ended the bout early.

“Very wild match. So far this season I have never been in a messy match like that,” Craig said. “I went to my back, he went to his back — it was a back-and-forth match but I knew I could pull through if I just stayed focused. I never thought I was going to lose, I just thought, ‘hey, I’m going to go for that win and I’m not going to stop.’”

The freshman is hoping his state championship will inspire younger wrestlers to work hard and go for their dreams.

“I’d see these big kids when I was in fourth or fifth grade wrestling and I wanted to be like that kid who just won (states). So it feels great to be the person that just won that state title because I used to look up to them, and now I know little kids will look up to me now because I did that,” said Craig.

The 113-pound championship match saw Cony’s Noah Dumas take on Kennebunk’s Alden Shields — and it was a rematch of a regular-season match which Dumas won 10-3.

Shields learned from that match at the Noble Invite and turned the tables on Dumas with a 3-2 win to grab his first state crown.

“I just knew I had to wrestle smart and aggressive because watching his earlier matches he was always the one who was being the most aggressive,” said Shields.

The new 113-pound champ will now look to make a return trip to Providence.

“I’d like to place at New Englands,” said Shields, who made a trip to Providence as a freshman but failed to qualify last season.

There would also be a first-time champ at 120 pounds as Noble freshman Josh Cote picked up a 7-2 victory over Nokomis’ Josh Brown.

“It feels amazing ... it really does. There’s not really other words (to describe it),” said Cote moments after stepping off the podium.

The freshman was happy that his hard work — both in the Noble wrestling room and in the offseason — finally paid off.

“I knew that if I really worked hard for it — I know this is going to sound like a major cliché, but if you put your mind to it you can get anything. You can get anything if you work hard enough for it,” Cote said.

Probably the biggest surprise in the finals came at 126 pounds where Marshwood’s Liam Coomey put on an offensive clinic in a 15-10 win over Noble’s Sam Martel.

Just a week before, Martel had put Coomey to his back for the fall at regionals but when it mattered most the Marshwood wrestler stepped up.

“I’m better on my feet than he his, but he’s definitely better on the mat. He has an easier time holding me down than I do him — and as you saw in the third period, he can score from on top,” said Coomey.

The Marshwood junior was happy to win an individual title and a team championship in the same night.

“It’s awesome. I’ve been working hard for three years under coach (Matt) Rix,” said Coomey. “We don’t have a large (team) so it’s a really close-knit group. I’m a captain of the team this year, so it’s really nice to lead it instead of being second fiddle to (four-time champ) Brad (Beaulieu) and all those guys.”

Skowhegan’s Samson Sirois joined a couple exclusive clubs when he picked up a 5-0 win over Mt. Ararat’s Ben Laurence in the 132-pound final. The win gave Sirois his second gold medal and his 200th career victory.

“I’m happy I got another state title and my 200th win. The 200th win was one of my biggest goals — it was in my mind since day one of practice this year,” said Sirois.

The senior has one major goal left on his plate.

The team champion Hawks would get their second champ at 138 pounds when David Spinney won a 4-3 decision over Bonny Eagle’s Caleb Frost in an ultimate rideout.

Spinney admitted that the Hawks clinching the team title before any of their individual title bouts helped him, Coomey and Dylan Strong.

“Once we sealed the deal, that took a lot of pressure off of Liam Coomey, me and Dylan because just that relief of stress let us go out and do whatever we want — and just wrestle,” said Spinney.

The winning point in the rideout came from a stalling call on Frost, who was warned earlier in the match.

“I really worked on being aggressive this week in practice and it showed as I was pushing the pace a little bit more,” said Spinney.

The Hawks’ latest team title came as a bit of a surprise as rival Noble dominated the regional tournament and Marshwood brought only seven kids into states.

“The fact that we were down to seven kids, we were talking about it this week in practice just giving it everything we had and regardless of the outcome just have fun, wrestle your best and we came through today,” Spinney said.

Camden Hills would get an individual champion at 145 pounds as junior Noah Lang scored an 11-2 major decision over Noble’s Jon Grenier.

“It’s just crazy ... it’s a huge weight lifted off of my shoulders,” said Lang, who lost to Beaulieu in last year’s final. “I feel like I’ve trained my whole wrestling career just to see if I can get a state title in high school. I’ve wrestled for 13 years, I’ve wrestled during the summer and it’s just finally paying off.”

Richards would take down Portland’s Zack Elowitch by a 9-3 score in the finals.

“I just had to go in there smart thinking ‘what is he going to do to counter it?’ With that match, usually I’m an aggressive wrestler, but Zack’s a kid where if you hit something wrong, he’s going to stick you,” said Richards who has a ton of respect for Elowitch. “So I was trying to make no mistakes and go off what he was kind of wrestling. It’s not really my (style) but I’m still kind of good at it, so I went with it.”

The junior is happy he has someone like Elowitch in his weight class at states and All-States as he prepares for the New England Championships.

“It’s a big thing because if you don’t (have that competition) then you go down to New Englands thinking, ‘oh, I’m a great wrestler,’ and then you get stuck in some stupid move and then you’re like, ‘oh, I’m actually not that great because my competition isn’t that good,’” said Richards, who went 2-2 last year in Providence.

Oxford Hills’ Dawson Stevens was able to capture his first state championship on Saturday with a 5-3 win over Nokomis’ David Wilson.

It’s a great moment for any wrestler, but winning his championship inside Memorial Gym made it even more special for Stevens.

“It’s a lot ... a lot of hard work that I put in — blood, sweat and tears,” said Stevens. “This gym is actually kind of cool to wrestle in because it’s where my dad (Oxford Hills coach Tony Stevens) won his second state title his senior year, and it’s where I got my first (title) now. There’s a lot of memories in this gym and I’m glad I could win my state title here.”

Another wrestler who was thrilled to win a title inside Memorial was Sanford senior Sam Anderson, who got to win his second straight title inside his home gym.

“If you were to write a fairy tale book, it would be the happy ending. It would be the ending that I wanted it to be — everything that I could have dreamed of,” said Anderson, who took down Marshwood’s Strong by an 11-5 score in the 170-pound final.

Oxford Hills would get its second champion at 182 pounds when Zuka Mabior earned a hard-fought 9-3 decision over Morse’s Sam Strozier.

“I mean I started wrestling in sixth grade in Florida and every time I used to go into that wrestling room it was just names on top of names (of state champions),” said Mabior on his motivation for winning a state title.

The new 182-pound champ went into the state meet looking to finally put it all together.

Cony junior Nic Mills would grab his second state title with a 7-1 win over Oxford Hills’ Jeffrey Worster in the 195-pound championship match.

Despite being a defending champ, Mills entered the state tournament a little nervous.

If you added up the amount of time the final two matches lasted, it wouldn’t even be a full period of wrestling.

Nokomis’ James Boyd started the fireworks with a 30-second pin of Sanford’s Nick Works in the 220-pound bout to claim his first title.
“It’s amazing ... it’s everything I’ve worked all season for. It just kind of puts a nice ribbon on my season,” said Boyd.

The final match of the night would only last 49 seconds as Erskine’s Jake Peavey pinned Cheverus’ Zeb Leavitt to win the 285-pound title.

When all was said and done, the Marshwood Hawks would be the ones celebrating with that team trophy — and legendary coach Matt Rix was thrilled for his squad.

“It means a lot. I mean with the size of the team — we had nine (healthy) kids in our room — and these guys did it, man,” said Rix, who had a feeling his team might surprise some people. “Coming in this morning in the locker room they had some music going, there was nobody hanging their head or dreading wrestling today ... I just had a really good feeling about today.”

It’s the 10th team title for the Hall of Fame coach, but this one is pretty special.


— Pat McDonald is the Sports Editor of the Journal Tribune in Biddeford. He can be reached at pmcdonald@journaltribune.com.
Posted by MAWA at 2/21/2018 01:35:00 PM
Email ThisBlogThis!Share to TwitterShare to FacebookShare to Pinterest
Newer Posts Older Posts Home
Subscribe to: Posts (Atom)