Ted Reese (Phd) is head coach at USM's wrestling program, having led Brandeis University's wrestlers to the best records in that school's history and having founded the varsity Maine high school programs at Camden-Rockport, Georges Valley, and Bonny Eagle. During his fifteen years at Bonny Eagle, the "Fighting Scots" were State Champions seven times, runners-up four times, and winners of the Sportsmanship banner twice. As a matter of fact, they have been Class A (for Maine's largest schools) State Champions four of the last five years. In this year's Wrestling USA magazine, the Scots were listed nationally as the twenty-ninth most successful school program of the past decade. 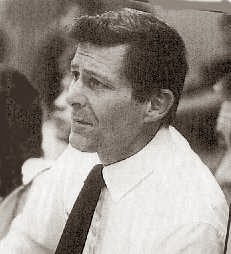 Reese's background is varied. He wrestled for Yale, winning the Gleason Trophy, and was New England freestyle champion four times. After getting his BA in English at Yale, he served in the Marine Corps and later earned masters degrees at both Harvard and Brandeis before being awarded a PhD in English at Brandeis.


Besides the schools where he founded varsity wrestling programs, Reese taught English and was head coach of wrestling at Noble and Greenough School, Milton Academy, and Tabor Academy (where he was head of the English Department). He has coached New England school and freestyle champions as well as three honorable mention scholastic All Americans and three Maine All Class Most Outstanding Wrestlers.


The first American to receive the designation as Master Coach from FILA, wrestling's international ruling body, Ted also earned a certificate of achievement from the Moscow Institute of Sport in 1987. He was head coach of Maine's team that toured Germany, Austria, and Switzerland in 1975 and over the years head coach of several Maine freestyle teams that competed in other international and interstate meets. He has been president of both Independent and public school coaches' associations, has been voted Maine's Coach of the Year six times, has been selected as Region I Coach of the Year, was chosen as Wrestling USA's National Coach of the Year in 1996, and is a member of Maine's Wrestling Hall of Fame.
Posted by MAWA at 5/12/1996 06:09:00 PM
Email ThisBlogThis!Share to TwitterShare to FacebookShare to Pinterest
Newer Posts Older Posts Home
Subscribe to: Posts (Atom)