Gary Kent has been without a doubt one of the most innovative coaches in Maine and New England wrestling circles. His career has spanned more than two decades and includes participation as a wrestler and official. The Auburn native attended Ithaca (NY) College where he first learned wrestling fundamentals, and later at the University of Maine at Orono. It was while at Maine that Kent became an intramural participant in the program headed up by Frank Spizuoco and Ian MacKinnon. 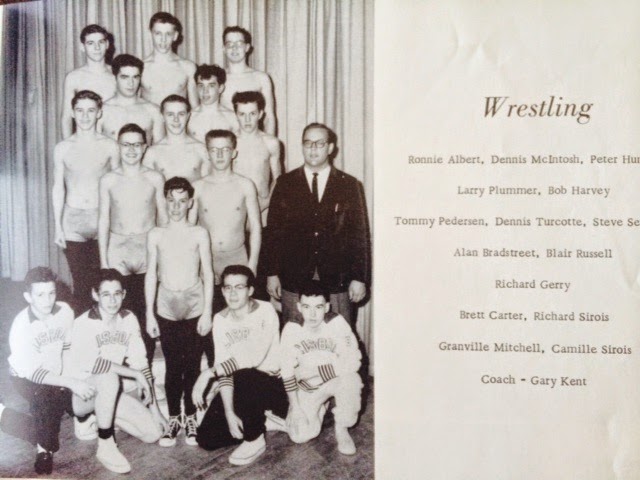 After graduating form Orono, Kent took over the reigns of the fledging mat program at Lisbon High School, and within three years had taken the Grayhounds to the state class B championship. That 1963 state title has been the only state wrestling championship at Lisbon. A three-year coaching stint at North Reading (MASS) high school was followed by one year at Rumford and two years at Sanford. His first year at Sanford saw the Redskins win a head to head confrontation with Keith Lancaster’s Skowhegan entry for the state crown.


In the fall of 1969 the new Massabesic High School opened their doors at Waterboro. The students were former Sanford enrollees and it seemed only natural that wrestling be included in the varsity sports program. Not one to pass up a challenge, Kent went to Massabesic as varsity football and wrestling coach. Opting for class A status immediately Massabesic wrestled a full schedule against top teams like Sanford, Runford, and Traip. Although they finished in last place in the state A tournament, it was apparent to everyone there the Mustangs were for real and a contender for the future.


During the next two seasons, giant strides were made as Massabesic finished sixth in the 1971 tournament and second the following year. That 1972 squad ran away with the Southern Regional with six champions, and lost the state title to Rumford by only three points. Representing Massabesic in the championship circle were Don Moreau (105) and Dan Ouellette (155), the first two Mustang state champs. The following year was also a Rumford-Massabesic finish, but this time more than 60 points separated the two teams. Harold Tuttle (132) was one of the few non-Rumford winners that day. A week later Earl Boyes (185) was to win the first of his three New England titles with a variation of the freestyle salto which would become his trademark. There lay the essence of the Kent genius. His ability to adapt various techniques from the international styles so scholastic wrestling. Later that spring, Kent took a group of wrestlers to New England AAU freestyle and Greco-Roman championships. To no one’s surprise several medals were won and with the new found expertise, Kent returned to indoctrinate the State of Maine. Freestyle champions at Lowell were Boyes (192), and brothers Phil (154) and Fred (UNL) Smith, both of Kennebunk, Greco champs were Boyse again (192), Sandy Rollins (178) and Art Tuttle (106) all of Massabesic.


Kent’s trip to the National AAU Junior Olympic Tournament in St Cloud, Minnesota, was not without its fruits of victory. Boyes became the first Maine wrestler to win a national title by taking the Greco championship at 192, while Tuttle and Frank Gagnon both finished sixth. Boyes also participated at the Junior World Championships in Alabama that summer.


Working closely with the National AAU office in Indianapolis, Kent was able to gain one of the eight national sites for the visiting Soviet National Junior team. That meet between the Soviet all-stars and the Maine freestyle champions marked the arrival of international wrestling in the state. And Gary Kent was the moving force. The meet became a state-wide media event. Pre-meet festivities, the actual meet, and the post-meet gathering became frontpage news. The Gannet papers were foremost in the list of sponsors. The Soviets crushed the Maine stars, but it really didn’t matter, because wrestling in Maine had come of age. And Gary Kent had seen his dream come true.


Two seasons at Hyde School followed, and the freestyle seasons saw national teams from Poland and Austria wrestle at various sites in the state. Again Kent provided much of the impetus to the programs and most of the actual coaching of the teams. The 1975 Junior Olympic champs were the first Maine wrestlers to travel to Europe to compete in a series of duals in Austria and Switzerland.