USM at Grapple at the Garden: purchase tickets on-line 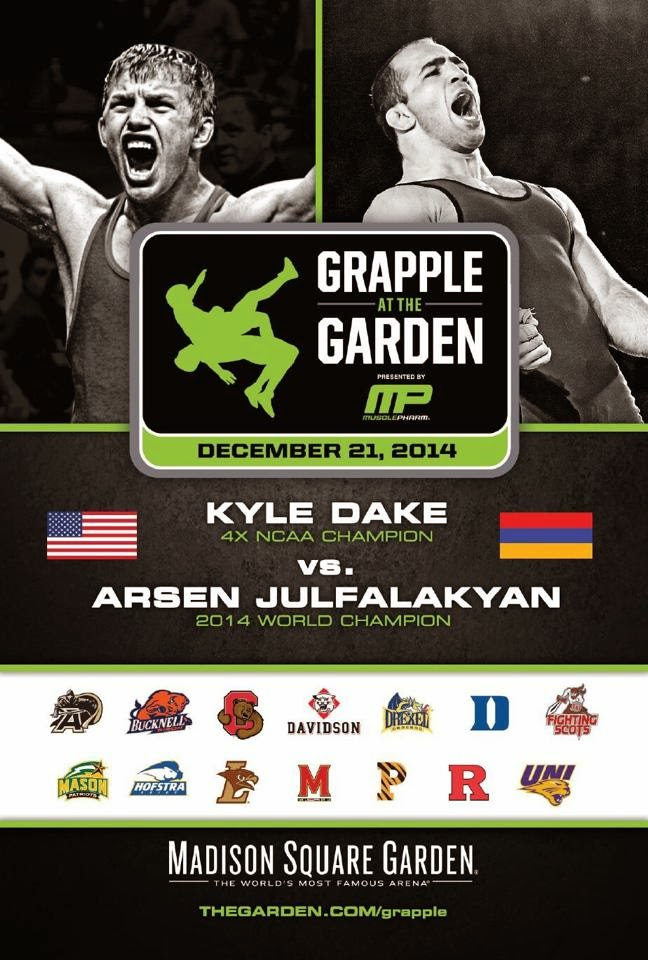 In less than a month, the University of Southern Maine Wrestling program will be competing in the worlds most famous arena, Madison Square Garden !

The Huskies take on #16 in the Nation, Stevens Institute of Technology (NJ) at 8am and Muhlenburg University (PA) at 10am. I attached the entire schedule of events at the bottom of this email!

The 'Grapple at the Garden' tickets are still available; please purchase them online at

and please choose "SOUTHERN MAINE FAN SECTION"; tickets are only $20. each

Please come down to New York City, support our student athletes while witnessing some of the best wrestling in the Nation in Division I,II and III!

It's going to be an unreal experience and New York City, in my opinion, is the greatest place to visit during the holiday season!

Thank you for your support, I hope to see you in the stands!

Posted by MAWA at 11/25/2014 11:28:00 PM
Email ThisBlogThis!Share to TwitterShare to FacebookShare to Pinterest

WORCESTER, Mass. Senior Sean Fagan (Arlington, Mass. and sophomore Daniel Del Gallo (Gardiner, Maine) each posted a pair of wins to lead the University of Southern Maine Huskies in dual meet action at WPI Saturday afternoon.  Southern Maine defeated Norwich University 23-18 in its first meet of the day and then dropped a 33-13 decision to WPI to close out the day.

With the split, Southern Maine stands at 5-2 in dual meet action.  Norwich is 0-2 with the loss to the Huskies, while WPI earned its first dual meet win of the season over USM to stand at 1-0.  Southern Maine's 23-18 victory over Norwich marked Huskies' head coach Joe Pistone's 100th career victory.  Pistone has been with USM since the 2003-2004 season.  In his 12 seasons, Pistone has posted a career record of 100-109-2.  He is the program's all-time leader in coaching wins.

In the win over Norwich, the Huskies' rallied to win the final two bouts of the match earning the 23-18 win.  Trailing 18-15, Huskies' senior Jonathan Deupree(Ozona, Fla./Countryside), ranked no. 1 in New England at 184 pounds, dominated Norwich's William Burns earning a win by technical fall 18-3 (5:24) to give USM a slim 20-18 lead.  With the match in the balance, Fagan battled to a narrow 2-0 decision in the final bout of the match – the 197-pound class -  defeating Norwich's  Saetyre McDowell for the 23-20 victory.

Posted by MAWA at 11/22/2014 08:55:00 AM
Email ThisBlogThis!Share to TwitterShare to FacebookShare to Pinterest

Wednesday, November 19, 2014
SOUTH BERWICK, Maine — It was the summer before his sophomore year, and Cody Hughes was looking for a place to work out while he was competing in the NHSCA High School National Wrestling Championships in Virginia Beach, Va.

There was a camp at nearby Virginia Tech in Blacksburg. Hughes went, liked it, and has continued to return.

On Tuesday, the Marshwood High School senior’s affinity for the Virginia school took a significant turn when he signed a National Letter of Intent to attend Virginia Tech on a partial scholarship to wrestle.

The Hokies are coming off a season in which they placed eighth in the NCAA Division I tournament, the program’s highest finish ever.

“They saw my work ethic, we talked and got to know each other,” said Hughes, who has since been down two or three times a year. “The first time I went, I didn’t miss home. It felt right.”

Hughes recalls that first summer he went to Virginia Tech, “I wanted to go to a camp close to the nationals to keep me in shape. I really loved it.”
Hughes is a three-time state champ for Marshwood, which is Maine’s Class A team champ three years running. He went 54-1 this past season and has a career record of 142-5. If he stays healthy he has a shot at the school record for career wins (194), held by 2007 grad Jon Hussey, and an outside shot at 200 wins.

“It’s nice to see everything working out for him,” said Marshwood coach Matt Rix. “You get out of it what you put into it. It’s where he wanted to go. It was really special to see him sit down and sign the paper.”

“It’s been a long process,” Hughes said of the college search. “I’ve been to a lot of national tournaments, trying to expose myself to as many colleges as possible.”

Wrestling has had a recent resurgence at Tech, finishing eighth this past year, after placing 10th and 11th, respectively, in 2003 and 2012. Previous to that, the Hokies had never finished better than 19th.

“It’s been down for a long time, but it’s looking up,” Hughes said. “They were eighth last year, and they’re looking better this year. They definitely know what they are doing.”
Hughes will receive athletic financial aid covering approximately 40 percent of his college bill in the first year.

“I can get more if I put the time in and good results come (coach Kevin Dresser) will help us out,” Hughes said. “That’s how he put it.”

Hughes is the second Marshwood wrestler to receive a scholarship to wrestle at the Division I level. Abel Schultze is the other, earning a full ride to Appalachian (N.C.) State in early 1990s. Schultze was a teammate of Todd Hughes, Cody’s dad.

He will need to do that in making the transition to college wrestling where he mentioned he could be on a five-year plan if he has to redshirt.

“The first few years will be a learning experience,” Rix said. “They’ve got some top-caliber kids. It will be a little different ballgame for him. But I think he’s prepared himself for it.”

Hughes, for now, can focus on high school and the matter at hand — helping the Hawks win a fourth straight state title. Hughes is one of fourth returning state champs with classmates Jackson Howarth and Brett Gerry, and sophomore Bradley Beaulieu.
“I’m really excited for this season,” he said. “We have a great group of kids. The program is the best around here. You’ll not find a better high school team in Maine.”

Hughes added, “Coach Rix makes the high school season grind like the college season. You have to be mentally tough to prepare for that. I know (when I got to Tech) I’ll be at the bottom of the food chain. The Marshwood program has helped to prepare me for the next level.”
Posted by MAWA at 11/20/2014 09:01:00 AM
Email ThisBlogThis!Share to TwitterShare to FacebookShare to Pinterest

USM Team Captain and 2014 NCAA National Championships Qualifier, Jon Deupree, climbs up 1 spot and is ranked #5 in the United States! The undefeated senior leads the USM Huskies (4-1) this Saturday against Norwich University and WPI in Worcester, MA!
http://intermatwrestle.com/rankings/d3/184
Posted by MAWA at 11/19/2014 02:32:00 PM
Email ThisBlogThis!Share to TwitterShare to FacebookShare to Pinterest

One common scenario that occurs is often initiated from the offensive/defensive starting position in the center of the mat when both wrestlers work their way to their feet and the action goes out of bounds. It can be difficult to determine if the offensive wrestler is pushing the defensive wrestler out of bounds, if the defensive wrestling is running out of bounds to make it look like the offensive wrestler is pushing him/her out, or if it is aggressive action by both wrestlers. Another common scenario is when one wrestler has a single leg in the air near the out-of-bounds line, and the other wrestler tries to jump or spin out of the situation and ends up out of bounds.
In the above situations as well as similar situations where a wrestler may be using the edge of the mat to get out of a situation, judgment is required by the referee with the primary question being “Was the wrestler wrestling aggressively and trying to stay in bounds or using the edge of the mat as a means to avoiding wrestling?” If he/she was using the edge of the mat as a means of avoiding wrestling, a technical violation should be called. Good wrestling action requires both wrestlers to make an honest attempt to stay within the wrestling area.

PREVENTING FALSE STARTS FROM CREATING INJURIES – PREVENTIVE OFFICIATING
Preventive officiating must be on every referee’s mind. One area of concern is injuries that occur during false starts from the neutral position. To avoid such injuries, the referee should stretch his/her arm(s) out between and parallel to the starting lines before blowing the whistle. By doing so, the referee can block either wrestler who false starts prior to the whistle, thus reducing the potential for injury to one or both wrestlers.

AUTHORITY/RESPONSIBILITY OF THE OFF-MAT REFEREE TO CALL FLAGRANT/UNSPORTSMANLIKE CONDUCT
The jurisdiction time of the referee begins when he/she arrives at the site of the competition and concludes with the approval of the scorebook in dual-meet competition and after signing the bout sheet after the last match in tournament competition. In either dual meets or individual tournaments, when a referee is not on the mat working, he/she still has jurisdiction in the mat area and responsibility for enforcing NFHS wrestling rules associated with the mat area. The referee on the mat is responsible for his/her match, but other referees involved in the competition should offer assistance in the mat area when necessary. Referees are reminded that just because they are not officiating a match, they still have responsibilities for enforcement of rules that extend beyond officiating a match.

When cleaning wrestling mats, it is beneficial to walk backwards in an effort to minimize contamination from the shoes of the individual who is cleaning the wrestling mat. Be sure that any product used states that it is effective against viruses, fungi and bacteria. Typically, the label will state the cleaner is bactericidal, fungicidal and virucidal. Please follow the label directions closely for the best effectiveness.

Several items should be kept at wrestling mat side to effectively deal with blood or other body fluids, including disposable towels and/or gauze pads, spray bottles containing a 1:100 chlorine bleach and water solution or a commercially prepared disinfectant solution. Protective gloves and disposable plastic bags must also be readily available to clean up blood or bodily fluids.
Likewise, it is imperative to clean all wrestling equipment daily. All workout gear should be cleaned after each practice. This includes towels, clothing, headgear, shoes, knee pads and any bags used to transport this equipment. In addition to cleaning wrestling equipment and wrestling mats properly, a few basic steps must be taken by all involved in the sport in order to minimize the risk of spreading communicable diseases.

• Educate coaches, athletes, referees and parents about communicable skin conditions and how they are spread.
• Maintain proper ventilation in the wrestling room to prevent the build-up of heat and humidity.
• Emphasize to the athletes the importance of showering immediately after each practice and competition with antibacterial soap.
• Wash all workout clothing and personal gear after each practice.
• Perform daily skin checks to ensure early recognition of potential communicable skin conditions. Athletes cannot be allowed to practice or compete if an active infection is suspected, even if the infection is covered.
• Do not share towels or personal hygiene products (razors) with others.
• Refrain from full body (chest, arms, abdomen) cosmetic shaving.
Communicable diseases are preventable. Following these steps can certainly decrease the chance that these communicable diseases will be spread among the athletes in the wrestling room and/or during competition.
Posted by MAWA at 11/16/2014 07:59:00 AM
Email ThisBlogThis!Share to TwitterShare to FacebookShare to Pinterest
Newer Posts Older Posts Home
Subscribe to: Posts (Atom)