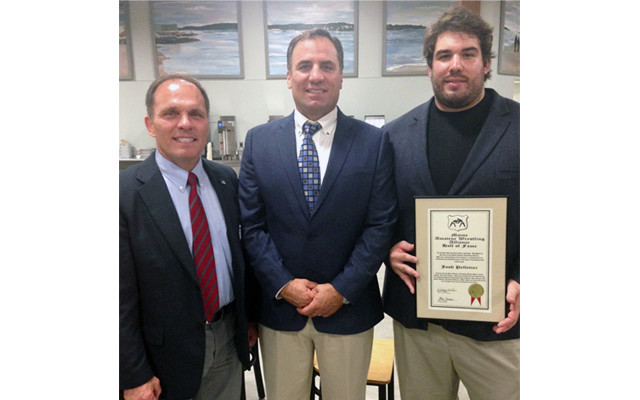 But individual success stories in the physically demanding endeavor rooted in a shared passion for the sport have landed all three in the same place — the Maine Amateur Wrestling Alliance Hall of Fame.

Josh Pelletier, now 28, was inducted during ceremonies at the Hyde School in Bath last Saturday night, joining his father Maynard (inducted in 2013) and uncle Romey (2000).

The younger Pelletier’s induction may have been the unlikeliest of the trio, only because injuries nearly prevented him from realizing his premier collegiate accomplishment in the sport, competing for an individual national championship as well as being part of a title-winning team at Liberty University in Lynchburg, Virginia.

Maynard Pelletier was a high school state champion from Fort Kent who in 1984 became the first University of Maine wrestler to qualify for the NCAA championships. Romey Pelletier was an alternate on the 1984 U.S. Olympic Greco-Roman team.

Josh Pelletier was one of the most successful wrestlers in Maine high school history, capturing three individual state championships while a student at Foxcroft Academy and winning the New England 275-pound title as a senior in 2006.

Pelletier earned a Reserve Officers’ Training Corps scholarship to attend Liberty University, where he battled back from a knee injury suffered during his sophomore year to work his way into the Flames’ wrestling lineup full time in 2010. He compiled a 15-8 record and placed second in the NCAA Division I East Regional, one win short of the nationals.

He returned to the regional qualifying meet seeded first in his weight class in 2011 but hurt his knee while warming up for his first match, beginning an injury-filled three years that also saw him leave school short of graduation.

As he continued to recover from knee and back injuries, Pelletier inched his way back into the sport as an assistant coach at Foxcroft Academy during the 2012-13 season, helping coach Luis Ayala’s Ponies win a third straight Class C state championship.

A year later, he was helping coach the University of Maine club wrestling team, which concluded its season at the 2014 National Collegiate Wrestling Association championships at Allen, Texas.

While there he reconnected with Julian Castro, his former coach at Liberty, which had dropped NCAA Division I wrestling and joined the NCWA in 2012 to comply with Title IX standards.

That meeting eventually led to Pelletier returning to Liberty in pursuit of his bachelor’s degree in criminal justice as well as for one last chance to wrestle collegiately.

It was a stunningly successful comeback for Pelletier after more than three years off the mat — he went 33-6 and advanced to the NCWA heavyweight championship match.

“As far as coming back and being an All-American and wrestling on the national stage and as a team winning the national championship, I don’t think there will be a memory like that,” said Pelletier recently.

“I’ll never forget that I was able to come back and stand on the podium at a national event.”

And while Act 2 of his wrestling career landed Pelletier in national-level competition, fond recollections similarly abound from Act 1 — when he compiled a 110-11 career mark at Foxcroft and earned considerable individual acclaim while also helping the Ponies win Class C state team championships in 2004 and 2005.

“The first part of my career with high school and the first part of college are obviously some of the best memories I’ll ever have, especially just being around my friends and coaches,” he said. “There’s just nothing like the friendships you make in the locker room with those guys you go through all those practices with every day.”

Pelletier now lives and works in Jacksonville, Florida, and continues to remain involved with the sport as head wrestling coach at Ludus Martial Arts.

He provides training and instruction and wrestling to approximately 30 professional and amateur mixed martial arts fighters who train at that gym.

“Honestly, I get by far the most joy from coaching and seeing someone who tells me they want to win, whether it’s a wrestling state championship or an MMA fight, and we develop a plan and I see them reach their goal,” Pelletier said. “When I see them work their butts off and follow through, I don’t think there’s any feeling like it.

“For me it’s way better to see the fruits of that labor and the next generation being able to benefit from what I’ve learned in the past.”

Editor’s note: Maynard Pelletier is a graduate of Fort Kent High School, where he won the 167-pound state championship as a senior in 1979.

He went on to the University of Maine, where in 1984 he became the school’s first wrestler to qualify for the national championships.

More recently, Pelletier served on the wrestling coaching staff at Foxcroft Academy in Dover-Foxcroft from 2001-08, where he helped coach his sons, Josh and Caleb.

During that time the Ponies compiled a 157-16 record with back-to-back Class C state championships in 2004 and 2005 along with five Eastern Maine titles and five Penobscot Valley Conference crowns.

Pelletier also was instrumental in the development of the Foxcroft Olympic Wrestling Camp held each summer at the school each summer.

Romey Pelletier, also a graduate of Fort Kent High School, wrestled at the University of Maine at Presque Isle before enlisting in the U.S. Army after his graduation in 1977. He went on to become became assistant wrestling coach at the U.S. Military Academy at West Point in 1978, a position he held through 1984.

Pelletier also continued to wrestle, winning the bronze medal in the 1982 Concord International tourney, the gold medal in the 1982 World Military tournament, and was the Canadian champion in Greco-Roman wrestling in 1982.

In 1983, Romey Pelletier was the national Greco open runnerup, and in 1984 he won a gold medal in Greco style at the Interservice Championships and placed first in his weight class at the U.S. Olympic Trials in Minneapolis, Minnesota. He was a team alternate for the 1984 Olympic Games.
Posted by MAWA at 8/22/2016 05:59:00 AM
Email ThisBlogThis!Share to TwitterShare to FacebookShare to Pinterest
Newer Posts Older Posts Home
Subscribe to: Posts (Atom)